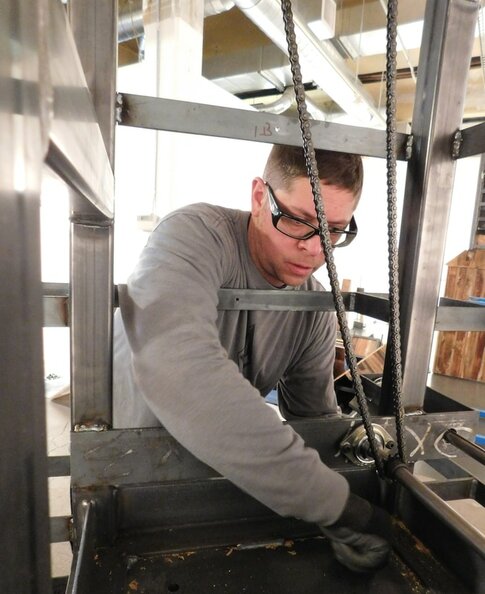 Chris McMullen was born and raised in Reno, Nevada where much of his free time was spent mountain biking and snowboarding in the surrounding Sierra Nevada mountain range. He moved to Seattle, WA in 1999 to pursue a career as a sculptor.

For many years he has incorporated motion into his sculpture. Chris works primarily with steel, a material that when used for sculpture, has often been bent, moved and stretched in seemingly impossible ways to exploit its strengths. His work is about making the material move literally, in real time.
He uses mechanics based on simple geometry to affect a series of shapes transforming mechanical engagement into a fluid motion. This motion can evoke memories or emotion, like the feeling of watching water or the slow tension of ships passing on parallel courses.

Chris McMullen has been working from his Seattle studio since 2000. A fascination with industrial process and a background in Graphic Communication has led to a body of work consisting of machine-like, interactive sculpture.

He is a recipient of the 4Culture Individual Artist Project Grant, as well as the Artist Trust Grants for Artists Projects (GAP). His work has been featured in the Bellevue, WA Biennial Sculpture exhibition; Bellwether, the Redmond, WA Outdoor Sculpture Exhibition, Bumbershoot, Maker Faire, Coachella, Winston Wächter Fine Art, Out of Sight at King Street Station, Bellevue Art Museum’s Biennial 2016: Metalmorphosis and Oxbow in Seattle, WA.
Chris also has work permanently installed in City Hall in Redmond, WA as part of the city’s collection,
the Science Museum of Oklahoma, and the Georgetown neighborhood of Seattle; commissioned by SDOT through the Office of Arts & Culture.

His most recent work is currently installed in Palazzo Mora, Venice, Italy for Personal Structures: Identities during the Venice Art Biennale 2019. This exhibition runs through Nov. 25, 2019.

Back to the Top